Netflix Synopsis: Zack worries that his friends have forgotten his birthday, while Rita sends him an unwelcome gift.

The episode begins in the ol’ Gym & Juice and we’re IMMEDIATELY confronted with yet another baffling invention from Billy. Presumably, Ernie is trying bake a birthday cake for Zack.

Meanwhile, Kim and Trini are busy making decorations for Zack’s surprise party. Billy, on the other hand, is just dicking around with a cassette tape player.

And ignoring Ernie’s pleas for help.

Ah, how nice! Rita wants to join in with the celebrations.

Jason turns up with some extra paint cans, presumably from a late-night DIY shop.

WOAH WOAH WOAH. The way Ernie mentions Batman and Gotham City with such ernesty kind of sounds like they could be real in the Mighty Morphin’ world. Could Power Rangers take place within the DCU? Or the other way around?! DON’T TEASE US LIKE THIS, ERNIE.

THIS would be amazing too in live action. (Image from the DC/Power Rangers crossover mini-series)

Question One: Why are Bulk and Skull waltzing into the G&J after afters? Question Two: Why is Bulk dragging Skull by the nose?

Billy tells Bulk the G&J is closed, and in response, Bulk picks him up like a child and just places him on the counter to shut him up. Such dominance.

Then, to continue his alpha-male display, Bulk blows his nose on the banner Kim and Trini were making.

Skull get’s um, weirdly rapey with Trini, which feels TOTALLY out of line with the kiddy hijinks they’ve been doing ’til now…

…but then he backs himself into something and falls over.

And there goes Bulk too. TIMBER!

The carnage ends exactly how you’d think – Skull’s face in the Cake-o-Matic.

Meanwhile at the cyber-peacock palace on the moon, Rita’s hankering for a new monster to gift Zack, and – wait! Hold up. Is that Goldar asleep against a pillar in the left hand corner of the shot? WAKE UP, GOLDIE.

Wow, there’s a monster catalogue! And we get to see some of our old favourites as Finster flicks through. Bones, Goldar, the Chunky Chicken… okay, maybe not all our favourites.

Oooh. We may have a new fave!

Oh, and the Knight gets backstory too!

Now, I know what you’re thinking. But unfortunately I don’t have a ‘Brief History Of Tarnac’ for you. Sadly, Tarnac hasn’t enjoyed as much popularity has Rigel.

Queue sped-up comedy routine with oldey-timey music of them putting everything away! I’m guessing Zack is doing His swaggity-swag cool guy walk thus luckily slowing himself down…

I like to think if Zack hadn’t interrupted Ernie here he would have just carried on listing objects and furniture forever. Also, does eating popcorn count as doing some after hours admin?

Okay, why are the Idiot Squad doing midnight blacksmithing?

Turns out they’re smithing a crazy sword for the Knight.

Then Rita swoops in and weaves some real (and I mean, real real) magic. Check out this super-witchy spell she casts. 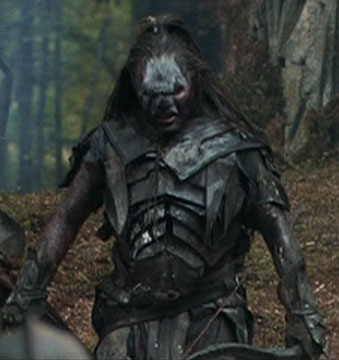 Kind of reminds me this dude.

In the morning at school, Zack tries to get a ‘Happy Birthday’ out of Kim, but she pulls that classic thing of pretending to forget someone’s birthday to divert suspicion away from them cottoning on that something might be planned for them.

I never get this trope – you can pretend there’s no party without having to pretend you’ve forgotten the birthday as a whole. It just seems mean.

Well, we already know how ridiculously high Zack can jump so this seems like a real possibility, Jason.

Then we get an ddd transition shot of the sun blazing really hot, and Zack just wondering around in the desert like Jesus, muttering to himself. “I should have just stayed in bed today.” SEE. This is why you shouldn’t forget your friend’s birthdays.

Oh, see Zack, not everyone forgot!

Why on earth are Baboo and Squat filming this? For posterity? For Rita’s home video archive? Or do they double-up as the camera crew for Might Morphin’?

Here’s your present Zack. Hope you, er, like it.

See what I mean about Zack and jumping?

Uh-oh, Goldar’s getting involved too.

Damn straight. Idk why Rita don’t carry on with this tactic of isolating and then attacking the Rangers – it’s clearly the most effective strategy.

Does something happen to Squat’s camera? Kind of unclear.

Meanwhile, Zordon senses a disturbance in the Morphin’ grid and Alpha tracks it down.

He calls the other Rangers, and Jason answers in the most nonchalant way possible.

The rest of the Rangers beam over to Zack’s aid.

Geez, this knight is as tough as he looks.

Oh boy, and his sword is burning out their weapons, too.

They try and hit him with everything they’ve got as a last ditch effort.

But, alas. The Knight prevails.

He even deflects the energy back at them.

Aw man, the Megazord goes down and the Nasty Knight – true to his name – stamps on it.

Luckily, the birthday boy has a bright idea.

It’s a little confusing as to what happens next exactly. It looks like the Power Rangers managed to mimic the Knight’s trick of absorbing the energy he throws at them…

…which they channel into the Megasword…

…and then use to destroy the Knight for good. This whole transference of energy thing seems similar to Bishop’s powers from X-Men or Diamondback from Luke Cage.

Victorious, the Rangers head over the G&J bar for some celebratory spinach smoothies, and lo and behold! There’s a surprise party waiting for Zack.