Welcome to the second in our series of bonus episodes chatting about all things Rangers-related – including news, trivia, and general nerd talk!

So, in this week’s Gym & Juice: After Hours we go DEEP and HARD into a spoilerific discussion of the long-awaited reboot movie. Everything from the changes to Rita and Zordon’s backstories, to the ethnicity-switching, to the Krispy Kreme gags, to Jason’s daddy issues, to Bryan Cranston’s unwavering devotion to his job, and of course the first (we think) cow wanking joke in a children’s superhero movie.

Unfortunately because the film has barely just hit the big screen at the time of recording (and writing this) we’re low on content for this visual companion. But, let’s just try and make do with what we’ve got.

Now, from this initial teaser trailer, we were feeling… doubtful. Doubtful because the dull and bitterly disappointing spectre of the Fantastic Four reboot movie seemed to be looming in the spirit of this teaser trailer. Everything looked a little too angsty, a little too serious and possibly prizing realism over the campy fun and brightly coloured world of Angel Grove that was at the heart of the original 1990s Mighty Morphin’ TV show.

Luckily, the full trailer came along later to dislodge these fears somewhat, by injecting a little fun and little action into the film.

Our fears were assuaged, but not gone completely. But then, Lionsgate tantalised our expectations more by releasing some cheeky clips.

Huh. Not looking too bad after all, eh?

And if THAT wasn’t enough to tempt us to the cinema, everyone’s favourite drug-slinger, loveable TV Dad, Rangers alumni and all-round-living-legend Bryan Cranston made an unforgettable appearance Stephen Colbert’s (I think we said it was Jimmy Kimmel in the podcast – soz, Stephen) show DRESSED AS THE RED RANGER OMG.

Possibly the greatest screencap to ever exist.

And to close up, here’s a collection of the best little sneak peaks, promotional videos and ‘behind the scenes’ features that were released in the run-up to the film.

Want to know what we thought of the movie? Listen to our spoilerific, in-depth discussion episode by clicking the links at the top of this post! And let us know what you thought too in the comments below or by tweeting, emailing or posting on our Facebook page.

Welcome to the first in our series of bonus episodes chatting about all things Rangers-related – including news, trivia, and general nerd talk!

First up, here’s everything we’ve seen so far from the upcoming 2017 Power Rangers movie reboot.

Here it is! The contraversional re-design of the iconic Mighty Morphin’ suits. You can see clearly that Saban is going for a more armoured look with these, and possibly a more ‘alien’ vibe too. Another big difference is the fact that they’re clearly CGI rather than real suits, which some fans may not like. The only other significant change is the missing skirt from the Pink Ranger’s uniform, which would be a refreshing change if they hadn’t instead added those dumb wedges to the bottom of hers and the Yellow Ranger’s shoes. Because, you know, how else would we be able to differentiate between the female and male Rangers? SO important on the battlefield. 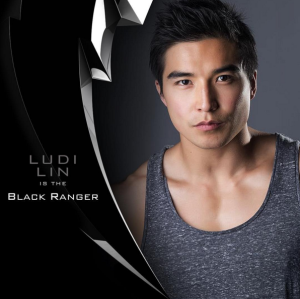 OH THE THIRST IS REAL. Let’s get into the casting! First up we’ve got Ludi Lin stepping in as Zack, aka the Black Ranger. He looks like he could kick your butt and steal your girl, which – let’s face it – is the Zack Attack down to a tee.

Next up it’s yo’ guuurl Becky Gomez as Trini, aka the Yellow Ranger. I was wondering whether they’re planning to change her character name, but I don’t see why ‘Trini’ couldn’t work for a non-Asian character, right?

You might be more familar with Becky by her pop star name, ‘Becky G’, and she’s a pretty decent one at that, too:

Stepping into the Red Ranger’s role, we’ve got Dacre Montgomery as Jason. Not only does he follow the tradition of ridiculous Red Ranger actor names (Austin St. John, anyone?), but he’s got those dreamy, baby blues to stare deep into your soul with. We’ve also seen that Jason’s dad has been cast too, so maybe the Ranger leader could be established as the emotional heart of the film? 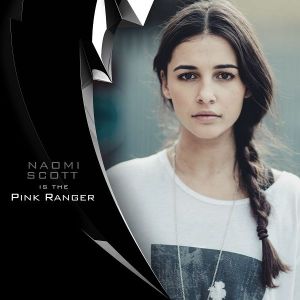 Naomi Scott is our new Kimberley, aka the Pink Ranger. This particular photo they’ve used of her doesn’t seem very representative of the peppy, sassy gymnast we all know Kim to be. This actress kind of has a wistful, sadder look in her eyes… Odd choice for the first official mugshot of the character. Maybe they’re going for something subtle. 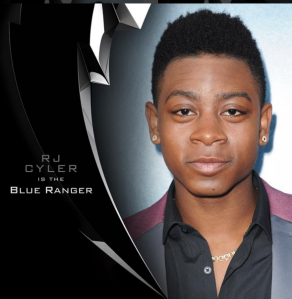 Fans of Me, Earl and the Dying Girl (like me) will be hyped to see RJ Cyler included in the casting list! AND he’s playing our favourite nerd, Billy, aka the Blue Ranger.

Me, Earl and the Dying Girl featured some really funny low-budget remakes of classic films. Here are some of the adorable hand-made posters that the characters made to go with their remakes. (‘Eyes Wide Butt’ is my personal fave.)

You really need to see this film if you haven’t already.

Annnnd just in case you’re worried that the CGI suits mean the Rangers won’t be shredded like the superheroes they are, well… don’t be worried. #DAYUM

Let’s get into the star power casting! Bryan Cranston is Zordon. No more needs to be said about this. It’s just that perfect. Can’t wait. 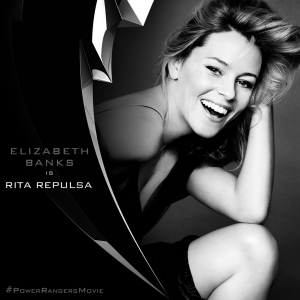 If you’re thinking that Elizabeth Banks as iconic drag queen Rita Repulsa is a weird choice, then just re-watch clips of her performance as Effy from The Hunger Games. Trust me – she’ll turn it out.

YAAASSSS. The funniest thing about this look is that you can legitimately describe it as ‘subtle’ compared to the original outlandish costume. Personally, I love it. It’s a great update to Rita’s look. Not sure why they’re channelling the snake theme, but I like it anyway.

Oooooh, look at this poster… Kind of gives you goosebumps, doesn’t it? But I have so many questions! Is that Jason standing nearest to us? Is that car the Rad Bug? Is Angel Grove a small town in the mid-West? IS THAT A LIGHTENING BOLT MADE FROM STARS?! I’m cautiously excited for this realistic, indie, YA movie feel Saban are clearly taking this film. I say ‘cautiously’ because this was the exact direction that Fantastic Four went in, and we all know how that hot mess came out. But I’ve got faith in you Haim Saban! Don’t let us down.

Now, let’s travel back from the future and dig into the past…

In this episode of ‘G&J: After Hours’, we discussed whether or not Power Rangers would work better as a cartoon than a live-action show. Even though the original Super Sentai show that PR is based on follows the ‘tokusatsu’ tradition of hand-crafted effects used in Japanese monster movies and TV shows, it seems like it would have been much cheaper and more effective to create an animated show instead. [This image was sourced from the PR Wikia, alledgedly from a binned animated project titled ‘Power Rangers GX’ that Disney may or may not have been developing.]

GOLDEN OLDIES CARTOON SQUAD: ASSEMBLE! A PR: Mighty Morphin’ cartoon airing in 1993 would have likely been made in the mold of one these classic animated Saturday morning shows. Now, this isn’t meant as a slight to these shows or their fans, but back in these ancient times, most cartoons were essentially treated as little more than extended adverts for toy companies. Though they were all certainly entertaining, there was no expectation/demand for them to be particuarly unique, deep, or critically acclaimed. Power Rangers was definitely written in this same way. [Image sourced from Observation Deck.]

One of the shows that helped completely change the face how these types of cartoons were made was Bruce Timm and Paul Dini’s Batman: The Animated Series in 1995. It wasn’t campy, glittery or psychedlic – it was dark, moody, and dramatic. The bar for producing kid’s shows of substance was truly raised after this show aired. To this day, it’s still considered the best comic book adaption ever made in any medium. 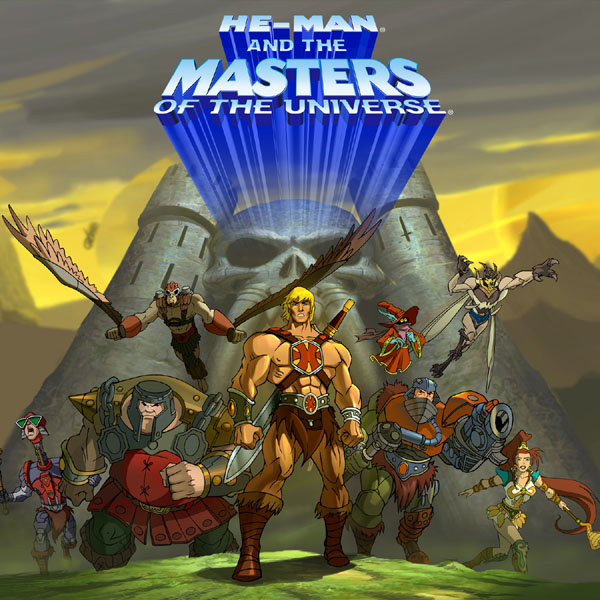 What PR: MM could really use is an awesome 21st century make-over, and there’s certainly already a precedence for this treatment turning out well. Just think back to the pretty decent 2002 remake of He-Man and the Masters of the Universe.

And the even more decent 2011 Thundercats remake. 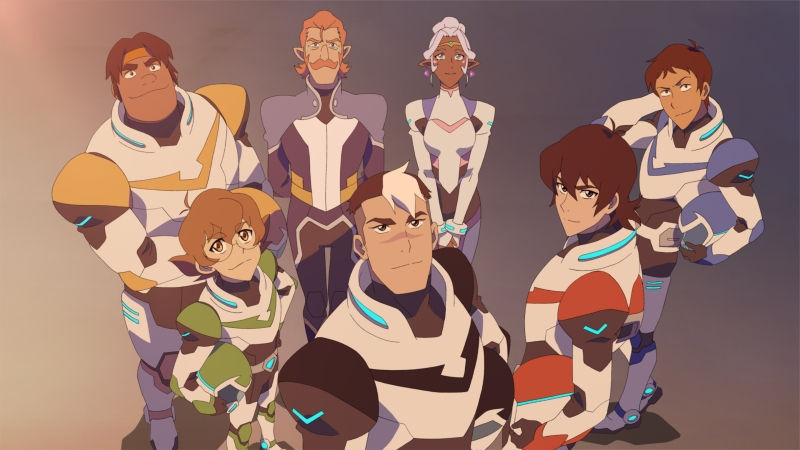 But the undisputed champ of 80s cartoon remakes has to go to 2016’s Voltron: Legendry Defender from the awesome team that brought you Avatar: The Last Airbender and The Legend of Korra. The premise – for those unaware – maaaay sound familiar to PR fans: a group of radical teens are chosen to pilot five Lion mechs that come together to form ‘Voltron’, defender of the universe. This show, more than any other, really manages to marry together the cheesiness of the 80s original with the ‘we-take-writing-for-kid’s-shows-really-seriously’ writing power of the 21st century. I really think this is the blueprint that any new iteration of PR should look to use.

And now, here’s some of our favourite mechs. Because mechs are COOL.

The ‘Eva’ Units from Neon Genesis Evangelion. So cool.